OK, so what does “as iron sharpens iron” mean? 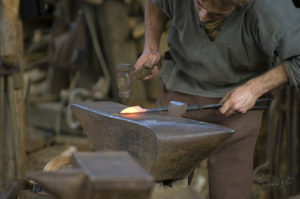 Blacksmith uses medieval style of anvil in his craft

The more modern translations just do not do this verse justice. In fact, they tend to cover up an important aspect of what this verse says.

You can glance over a passage of the Bible and think you know what it means, but then when you stop and think about it for even a few seconds, you begin to realize that what you thought it meant probably isn’t correct. You ever have that happen? I have, and this verse really stuck out in my mind recently as one that didn’t make as much sense as I originally thought.

My previous understanding of this, which was reinforced several times by various speakers unfortunately, was like you see in one of those hibachi restaurants. They take knives and/or cleavers and bang them together as though sharpening them with one another in quite a show.

However, outside of entertainment, have you ever seen anyone do this in real life? It might look good in a movie or in a hibachi, but frankly it isn’t all that practical, is it? When I considered how I had always sharpened knives and seen others sharpen knives, 80% of the time they didn’t even use iron but rather used whetstones.

Friction and grinding are what sharpens knives and swords. Whetstones provide exactly that. Whenever I’ve not seen a whetstone used, it was by a metal file, which also grinds and creates friction.

It is not necessarily a pleasant experience.  In fact, friction can cause arguments and split people apart if carried too far. So, what causes the sharpening instead of the splitting asunder?

I believe that it is because they are made of the same material. They are working towards a common purpose, being made of the same substance. As Matthew Henry’s Commentary says of this verse:

In its purest form, countenance means “face”. It can be figurative or literal. It is implied to be presence, esp. when talking about the face of God. The cries of Sodom were great before the face of the Lord. After getting their chariots stuck in the mud, the Egyptians tried to flee from the face of Israel, but of course it was too late then and God caused the Red Sea to close back up upon them.

When speaking of individual people, though, it usually literally means face, but the face often mirrors what is going on inside. How many times does the Bible say a person’s countenance had fallen? When angry or displeased, the mouth droops, the eyebrows furrow and often even the eyes look downwards upon the object of scorn. Cain’s countenance fell when God did not accept his sacrifice. Laban’s countenance fell when after a time he had squandered his money and Jacob was becoming greater than he.

Jamieson, Fausset and Brown’s Commentary says of this passage:

…that is, conversation promotes intelligence, which the face exhibits.

One’s face, that is, one’s countenance, shows much about the inner workings of a person. It does not show everything, but there is a good reason one must practice a “poker face” when playing cards.

However, I want to stress two things I’ve already mentioned: A person can be sharpened for a purpose, whether good or bad, and that will be determined in large part by the company that person keeps. Second, sharpening comes by friction and grinding, and it isn’t necessarily pleasant.

Still, there is an even more extreme form of “sharpening”, if you will allow, and this had not occurred to me until looking up references for this article. That is, a hammer strikes a red-hot piece of metal to shape it, and when the desired object is a sword or knife, it is being shaped, i.e., sharpened, by heat and by striking. Talk about unpleasant!

Don’t get me wrong here! It doesn’t mean to go out of your way to be abrasive. We are to speak the truth in love. However, being human, we are naturally abrasive to one person or another.

Here’s the thing: A lot of these COG organizations talk an awful lot about unity. When they say this, at least for some organizations, it is a code word that means you must speak, act and think how they tell you to. To be unified is to agree 100% with them.

Is that what God intended?

Is there any higher form of unity than marriage? A man and a woman, and that is the biblical definition of marriage, come together and declare to God, family and society that they are now one unit. They are to become “one flesh”. The only relationship that should ever be closer than this is to God and Jesus Christ! In fact, HWA often referred to marriage as a “God-plane relationship”, as it was so far above what human mortals could conceive of.

By using some COG organizational definitions, this new unit should always speak, act and think the same things. The man and woman would never have a difference of opinion, never disagree, never argue and certainly never say so in public. If you have been married for more than 15 minutes, you realize how silly and illogical that is, but that is exactly what some messages I’ve heard in the past would say about unity in the body of Christ.

Not only do I think they have it all wrong, I would put it forward that it isn’t even what God intended. In fact, I would even state that Christ intended for people to use their brains, and that alone means reasonable people would disagree from time to time.

So, what of Paul’s many admonitions for unity? To speak the same thing? It should be noted that there are nonnegotiables, and Paul had to deal with only some of the ones that came up in his day, let alone the ones that have crept up over and over during the almost 2,000 year interval since. There are heresies, false teachers, people with itching ears, and so forth. They have always been, and they will remain until Christ returns and reveals who are His.

However, even Paul wrote about “doubtful disputations” (Ro 14:1). I am convinced that everyone should read this at least once a year as a reminder. Of course, I am of the opinion that one should try to read the Bible all the way through once a year anyhow, but there are certain verses that apply to these postmodern times more than others.

It is not a sin to have a different opinion about something that is easily disputable. What is a sin is causing division and strife over making a mountain out of a molehill.

17 Now I beseech you, brethren, mark them which cause divisions and offences contrary to the doctrine which ye have learned; and avoid them.

It is important to understand the ramifications of unjustly putting someone out of the church!

13 But woe unto you, scribes and Pharisees, hypocrites! for ye shut up the kingdom of heaven against men: for ye neither go in yourselves, neither suffer ye them that are entering to go in.

Life is about change. Jim Daly of Focus on the Family often likes to say that marriage was designed to take the rough edges off of one another. It was not good for man to be alone in the Garden, a perfect environment, and it is not good today. Men and women learn to grow and change as they resolve their differences within a marriage.

And, that, ladies and gentlemen, is what this church thing is all about! Will Christ return and grade us on honest differences of opinion, or will He return and grade us on how well we dealt with those differences? Will we learn how to deal with the smaller matters such as meats offered to idols if not outright vegetarianism? Will we know where the lines are drawn and put out someone actively practicing an immoral lifestyle? It seems from where I sit that we have been guilty of swallowing camels and straining upon gnats.

God expects unity, but the question should always be: What kind of unity?

Iron sharpening iron creates friction, which creates heat. If the metal is too deformed, it might require striking and great heat. Are we so inclined to appear united that we resist that heat, friction and grinding?

Better yet, do we listen to differing opinions and prove to ourselves whether or not they are true? We all are blessed to live in a world where literacy and even the Bible itself are taken for granted. Do we read and compare what we are told to it? Do we allow the friction to sharpen our inner selves, which will be reflected upon the outside?

Or, do we just turn it off, turn lukewarm and indifferent? Do I have to mention what biblical church group that should remind everyone of?