Do our reactions show grace or judgmentalism? 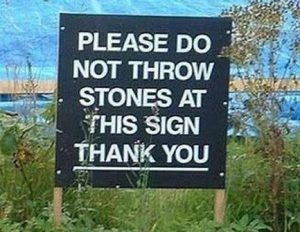 32 Jesus answered them, Many good works have I shewed you from my Father; for which of those works do ye stone me?

Nothing really changes when it comes to human nature. I am thoroughly convinced that confronted with Jesus Himself, there are many “Christians” and those who left the faith alike who would crucify Jesus if He were alive today.

Love to Hate Him

Joel Osteen is one I have no desire to listen to. His health-and-wealth gospel, based more upon corny homilies and emotional appeals than the Bible, is actually quite dangerous. The idea that God always blesses those who obey Him with material wealth and privileges flies in the face of the story of Job. Job was so righteous that even God called him out as such, but that did not protect Job from persecution.

Still, for all of the deserved criticism of Joel Osteen, the Internet, and particularly Twitter, has no compunction at throwing stones at him without any facts at all but hearsay.

People laugh at Homer Simpson, who insists that TV never lies. Yet, millions each day are duped in one way or another by a blog post, a “news” article, a tweet or a Facebook share. This is not even considering the vast number of people who fall for email scams every day. Somehow, if it is on a screen, it must be true.

We live in a time, as USA Today put the entire story, “What matters, as is often true, are the optics.” This proves to me that the news media, USA Today included, is not interested in the truth but only in appearances, for that article goes on to say how Lakewood Church should have done “something”. It only takes a five minute search, though, to discover that since they could not take in people, they used the space to distribute goods around the city.

Ed Stetzer of Christianity Today wrote, “It seems some Christians hate Joel Osteen more than they love the truth. I’d expect that from the world, but I hoped for better in the church.”

Of course, judgmentalism towards someone like Osteen comes easy. It might even make one’s ego feel justified for harboring certain thoughts and emotions. However, some really criminal actions can be easily overlooked when the target is a celebrity. After all, OJ Simpson literally got away with murder, IMO.

I still am very amazed and puzzled when I think about reactions when it came to light that Michael Jackson molested some boys. This normally is the one crime that no matter what, whether innocent or guilty, most accused will have their lives forever ruined. However, Hollywood jumped to Jackson’s defense because of his “talent” and his “art”. Jackson’s actions were to be overlooked because, if we were honest, he was rich and famous and above it all.

So, I ponder how people will treat Matthew James Phelps, whose story ironically ran today. You’ll see the irony in a minute.

TLDR: Phelps took a lot of cough medicine and woke up with his wife murdered in his bed, and he believe he did it in his sleep.

Matthew Phelps worked at Dunlap Lawn Service and graduated from Clear Creek Baptist Bible College in 2011 in Pineville, Ky., where he studied mission and evangelism, according to his Facebook page.

If he had attended Ambassador College and belonged to xyzCOG, I could predict the answer. The anti-COG critics would fume and foment at the mouth about how belonging to a “cult” caused this to happen, and then no matter what xyzCOG did in reaction, it would be criticized. If it did nothing, then xyzCOG would be an accomplice via their silence. If it supported him, then it would be even worse. If it distance itself from him, then they would be “throwing him under the bus”, for, so they say, that is what xyzCOG always does is throw people under the bus. No matter what, xyzCOG could not do anything right in their eyes.

That’s not all. Certain nonprofit nonprophesying prophets would condemn him for being a “false minister“. Even though God is the One who is ultimately the judge of our final fate, I suppose that “prophets” are altogether in a special class, and they alone can be the judge and jury. After all, they were “chosen”, so the rules don’t apply.

How Do I Know?

This is not a prophecy. It has already happened.

It is odd because I knew Steve Allwine. He seemed like the typical geek — sort of kept to himself and surrounded himself with technology. Yet, he also seemed devoted to his family, which makes the tale even stranger. Even when working in Ohio, he returned home almost every weekend, and once his family came to see him. Not exactly what you picture as someone who not only cheats on his wife but plots her murder.

What’s really amazing is that no one seems to learn anything from anything. No one learned from last year’s election, and no one will learn anything from this incident either. Human nature gets stuck in its ways, and it becomes more and more obvious that only God can change it. Even more to the point, this is not the first time something like this has happened.

Undoubtedly, Israel would have taken a lot of flack from an incident like this, and many would have condemned King David outright. In fact, they did. Do we really think it was solely his sons he was at odds with? After all, without followers, where could rebel leaders get their power?

Indeed, they probably felt quite justified. After all, King David had killed a man to cover up his sin. Not just any man, either, but one of his most talented and trusted soldiers. Uriah was likely a hero to many.

Ahithophel was King David’s most wise counsellor. We learn from the Bible that he turned against David and gave counsel to Absalom when he rebelled. When Hushai’s advice was taken over his own, we learn that Ahithophel hanged himself.

We can only guess in retrospect, but most likely it was because he could not consider going forward in defeat. If David won, it was likely to mean the loss of his head anyhow. To get to this point, he must have had something against David so much that he could never see reconciling.

In fact, the evidence is that Ahithophel was Bathsheba’s grandfather, and he likely held a grudge against David for destroying her life as well as Uriah’s.

For all the wisdom in the world, Ahithophel could not conquer his emotions and see that it is foolish to fight against God’s will. If God forgave David, then who was Ahithophel to not forgive him?

That brings us to the real question: Who are we not willing to forgive?

It is amazing how people will, over 30 years later, water and nurse their particular root of bitterness (Heb 12:15). By doing so, they might just be sealing their own fate (Mt 6:15).

Yet, what of those who remain in the body? Do we pray for the ability of Allwine and others like him to repent, or do we simply throw stones? Unfortunately, it seems most want to choose the latter.

Jesus was God in the flesh. By all legal standards, He let the woman caught in adultery go with the admonition to “sin no more” (Jn 8:11). Technically, though, since He was and is God, He knew the truth. He could have condemned her, citing His authority to judge. He could have even invoked the Father as a second witness. Yet, how many of us would have let her go?

Is it any wonder that Jesus Himself was crucified?

We All Need Healing

This was hard to write. I’ve kept it bottled up for months now. It just goes to show, though, that it all comes down to healing. It is not just the sinner who is affected. If my eyes fail to see, then my whole body and livelihood are threatened, not just the eyes. Even surgery on the eyes might cure the problem, but the eyes will still need to continue to heal. When someone we know falls down, or worse away, then the pain reverberates through the church body. No matter the cure, the pain is there, and healing is required.

The fall days are about the nations and the world. The world sees more saber rattling, leading us to take up arms again. This world needs healing.

May the coming holy days bring you reconciliation and healing like none before.