There are many right ways and many wrong ways we can react to the landmark decision on gay marriage. 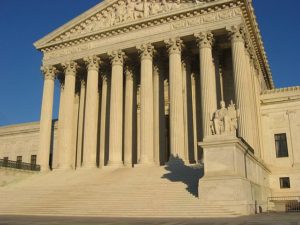 3 And why beholdest thou the mote that is in thy brother’s eye, but considerest not the beam that is in thine own eye?

4 Or how wilt thou say to thy brother, Let me pull out the mote out of thine eye; and, behold, a beam is in thine own eye?

5 Thou hypocrite, first cast out the beam out of thine own eye; and then shalt thou see clearly to cast out the mote out of thy brother’s eye.

There are many responses one could give to yesterday’s landmark decision that legalizes same-sex “marriage” across the United States.

One thing that should be noted is that it does not, yet, require ministers to marry couples against their beliefs. Of course, the loud and vocal proponents, mostly because the news media is on their side and for the most part ignores the discrimination against those who believe in traditional families, are lying when they say it’s about them and not about forcing anyone to do what they do not want to do. The lawsuits against people who refuse to bake cakes or print flyers that support a lifestyle that they do not believe it tell the real story.

So, what’s next? Discrimination, that is what is next. Fairness would dictate that a Muslim paper would have to run cartoons of Mohammed. Fairness would dictate that a black bakery would have to make cupcakes with “KKK” on them. Of course, that isn’t going to happen. However, those who profess Christianity with any sort of traditionally Christian values will be persecuted.

Glenn Beck has predicted widespread persecution of those who hold traditional views on marriage, and he believes that gay marriage should be allowed! Even Franklin Graham, with whom most of us would have several disagreements, understands the risk that Christians will soon face:

The Washington Post printed in their Acts of Faith section:

Frankly, we should not be supportive of a decision to allow sin, but on the same token we should realize that it is no different than any other civil law that we disagree with. It is, without a doubt, a line that shows just how far in depravity we have gone, but at the same time we are killing millions of unborn babies who have no voice in the matter. We should realize that homosexual behavior is no more sinful than other sins.

The Aventist Review wrote a balanced statement which in part reads:

While the church respects the opinions of those who may differ, it will continue to teach and promote its biblically based belief of marriage between a man and a woman.

The Seventh-day Adventist Church believes that all people, regardless of race, gender, and sexual orientation are God’s children and should be treated with civility, compassion, and Christ-like love.

Can we be so gracious? We should be, whether part of the COG movement or not.

“Why?” you might ask. Because, my friend, Christianity as practiced in the United States and even within the Churches of God tends to be quite hypocritical when it comes to this topic. We decry gays, but we stand behind people who marry and divorce with ease.

As Christianity Today, another publication we might be inclined to normally disagree with, puts it in “Six Things To Do after the Supreme Court Decision on Gay Marriage“:

One issue that demands special attention is divorce and remarriage. The Bible has a fair amount to say about marriage (as much or more than it does on homosexuality), and yet the evangelical church has become lax about honoring the marriage vow. We use the word grace in a cheap way to avoid the awkward tough love of church discipline. Such inconsistency has been a major stumbling block for those outside the church. This does not mean we forbid all divorce, nor all remarriage. It does mean we evangelicals need to come to consensus about what constitutes legitimate biblical grounds for divorce and for remarriage, and maybe even create a covenant amongst ourselves that will help us to abide by our convictions on this matter.

I believe that this is just as indicting as Jesus was to tell the hypocrites to first pull the beam out of their own eyes. American mainstream Christianity has openly shown its hypocrisy with its increasing tolerance of easy divorce and remarriage, and even the fact that statistics have shown divorce is higher within that community than the society at large! However, can the Churches of God claim a better track record?

Most of the COGs have already put out initial statements following this anticipated landmark decision.  The odd man out seems to be PCG, although I’m sure that no one will find any subtlety in their recent article “Tales From an Upside-Down World“.

Here are some more direct reactions:

In the end, though, we must respond with love towards even our enemies, so how much less should we respond to those struggling within the bonds of sin? Should we bottle up or put away our empathy? Jesus did not. He even ate with “sinners”, much to the chagrin of the religious elite of His day.

However, He also told the woman caught in adultery to go and sin no more. He showed her love and mercy, even though He made it clear that repentance is the way.

It is weird that people want to change the outer and ignore reality, such as how a white woman can be black, a man can be a woman, even for an hour, a day or forever, a family can be redefined, but people are not willing to change what counts: the inside.

It is upside-down, but part of, if not most of, our message is: People can change!

9 Know ye not that the unrighteous shall not inherit the kingdom of God? Be not deceived: neither fornicators, nor idolaters, nor adulterers, nor effeminate, nor abusers of themselves with mankind*,

10 Nor thieves, nor covetous, nor drunkards, nor revilers, nor extortioners, shall inherit the kingdom of God.

We can be free from sin! However, we must first turn over our hearts, minds and beings to the Creator Who wants and knows what is best for us! That should be part of the message we provide for people who are struggling with sexual as well as other sins!

* See CARM’s Matthew Vines on 1 Corinthians 6:9-10 for a more full treatise of this passage, including “abusers of themselves with mankind”.

One thought on “Same-Sex Marriage, How Should Christians React?”