[This is a republish of an article I originally published 16 Nov 2010, with slight edits, due to the fact that some people are intent upon rewriting history.] 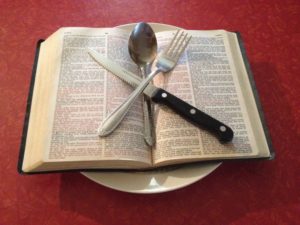 An anonymous comment recently asked if I had read the posting by Abigail Cartwright of “Review of Paper ‘Fasting, Prayer and the Will of God'” (link now defunct).  I admitted that I had only skimmed it over once.  I have since re-read it, and here are my thoughts.

First of all, the “Fasting Paper“, as it came to be known, came out about the same time as the nicknamed “Sabbath Paper“, the latter which was subsequently withdrawn.  Neither were very impressive papers, to put it mildly.  Both evoked thoughts of, “Now, what is this about, anyhow?” and cause so many more questions than were answered.  The Sabbath paper, however, overshadowed the fasting paper, mostly because the Sabbath is a core bedrock doctrine.

One difference is that the fasting paper, if it were rewritten, might be somewhat salvageable.  I would be forced to ask, though, “To what end?  Are there not already articles and papers on fasting?”

The problem, as I see it, is that it reads more like a justification for rescinding the move to Texas than it makes a statement on fasting.  Take for example:

The elders voted in 1997 that the home office should be moved from California to less-expensive and more central Ohio.  We believed that was God’s will, and subsequently fruits of the choice proved it wisely to be just that.  But what about the 2007 resolution to relocate the home office to Texas, which very narrowly passed?  That resolution in effect rescinded the original move to Ohio until it, in turn, was rescinded itself in 2008.  If God’s will was absolutely ironclad by fasting and prayer in 1997, then how could the proposed move to Texas have been justified in 2007?

I think I haven’t commented on this paper before, because it makes my head hurt to read it.  At any rate, it makes a number of assumptions, and few if any are true.  Most of all, it points out that the paper really isn’t even about fasting, but rather about the move to Texas.

There are certain points in the Analysis paper that I’m just not going to investigate.  The money figures either stand or they fall on their own.

One point I would like to comment on is about the call for a church-wide fast.  The Analysis paper reads:

Fasting Paper: “It is important to remember that there was no official request for a church-wide fast made by the church president in his video sermon proposal for the home office move in February 2007. The only request to fast and pray was part of the regular Call and Notice packet which was sent to the General Conference of Elders that spring.”

All in all, I have to admit that I share some of the concerns that are presented in the Analysis paper.  The idea that any of the church fasts were a means of invoking some sort of “sympathetic magic” is derogatory towards anyone who actually followed through on the request and fasted.  The continual swipes at anyone who wanted to move to Texas are uncalled for.  Such self-righteous and hurtful actions do no one any good.

Unfortunately, the “Fasting Paper” is the sort of childish communication that seems to be the status quo that comes out of Cincinnati these days.  Instead of Biblical teachings, you get a series of rambling explanations and justifications for why the previous administration was wrong and the current one is right.  It is an embarrassment to place on an organization’s official website.  It should be removed yesterday.