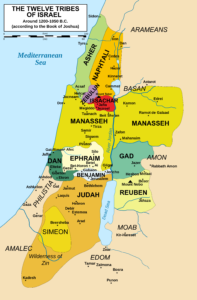 English translation of map of the 12 tribes of Israel, before the move of Dan to the North.
by Malus Catulus, under CCA-SA
Click to enlarge

So far, we’ve had an overview of the Book of Judges.  This book chronicles a cycle of sin, servitude, supplication and salvation over and over again.  It is a testament to God’s loyalty and trustworthiness to not abandon His people.   It is also a story of His mercy in that they had more years of recorded peace than captivity.

Chapters one, two and part of three provide the introduction and background.  Chapter 1 starts out, “Now after the death of Joshua…” setting the approximate time frame.  This section of narrative extends up to a break after Judges 2:5.

It is important to not forget this, for in reality, Joshua would have been the first of the great judges, unless you counted Moses in that group. Moses was more of a prophet than a judge, IMO, so I don’t count him in that group, but only as a technicality.

As I’ve stated many times, history in the ancient world wasn’t viewed like we tend to do today.  Instead, themes are centered upon, even if the actual incidents are separated by a gap in time.  These incidents are usually referred to as “insets” in the Bible.  A good example occurs in an account given in Judges 1 that also occurs in Joshua 15.  Most likely, the inset is in Joshua 15, and the account actually occurred after Joshua’s death, the time frame given in Judges 1.

In support of the account of Othniel, nephew of Caleb, occurring after the death of Joshua precedes that account, and it is of the defeat of Adoni-bezek.  As far as I can tell, this is the only place where this name occurs, and it is a new item that comes just before the narrative about Othniel.

Judah, one of the major tribes of Israel and the tribe that was promised the scepter, is named first after the death of Joshua to conquer Canaan (vv 1 – 2).  The stories of Adoni-bezek, Othniel, conquest of Zephath, Gaza, Ekron and Hebron take up much of the chapter.

There are some subtle but important differences between how the Book of Joshua and the Book of Judges cover the conquest of Canaan, however.  The Book of Joshua seems pretty upbeat and favorable towards Israel and their conquest, but the Book of Judges seems more pessimistic in tone.  Even the mostly favorable account of Judah ends on the note that they “could not drive out the inhabitants of the valley because they had chariots of iron” (v 19).  In contrast, we see in v 17 that the city of Zephath was renamed to Hormah (“utter destruction”, but it also means a “wholly burnt offering”) because of its complete destruction.

Manasseh, one of the (if not the) largest tribes, really had problems, and they failed to drive out those of Beth-shean, Taanach, Dor, Ibleam and Megiddo.  That’s five city-states with their surrounding territories.  Students of numbers in the Bible probably have picked up on that fact.  Five in the Bible can mean grace.  “Grace” simply means “favor” in its simplest translation.  God shows His favor by blessings.  However, the flip side is that five can also mean a curse, and thus stress the weakness of mankind.  In addition, it often is tied to learning and wisdom or the lack thereof (e.g., five wise virgins vs five foolish virgins), which is often done through either grace or a curse.  In the case of the ten virgins, the number ten stands for completeness, the utter amount, and five is a complete subset within the whole.  For all intents and purposes, Manasseh failed in their obligation to push out all of the inhabitants of their territory, and they did so utterly.  Not only that, but they kept some of them around to pay tribute, which is not what God commanded.  They will have to learn the hard way (cf Jdg 2:3).

Contrast Ephraim with Asher, though.  Ephraim dominated and made the Canaanites pay tribute, but the “Asherites dwelt among the Canaanites”, which is a clear indication they were not dominate.  They left inhabitants in Accho, Zidon, Ahlab, Achzib, Helbah, Aphik and Rehob.  Seven cities, and seven represents completeness.  Asher completely and utterly failed in their mission.

And Naphtali?  Naphtali also dwelt among the various inhabitants: Beth-shemesh, Beth-anath.  Did you know that “beth” means “house”?  Not only did they live there, but they were still “in da house”!  They still had a “home” there.

And Dan?  Well, clearly the Amorites had the upper hand.  It took the “hand of the house of Joseph” to even make them tributaries (v 34).

Am I being too hard on them?  I think not.  God said He would drive them out of the land.

If that’s the case, then the problem must have been slackness on the part of the Israelites.

We then open up chapter two with an “angel” speaking to them and rebuking them for not driving out the inhabitants of the land.  This “Angel of the Lord” is a reference we see time to time in the OT, and it seems to be the pre-incarnate Jesus Christ when you examine the verses all together.

This Angel, then, tells Israel that God will now not drive the inhabitants from the land.  Why?  Didn’t God promise to do so?

Sometimes, we expect God to do all the work for us.  However, He is the One Who gives us life, breath and strength.  He expects us to use all those things He has given us.  We can become comfortable with our own “inhabitants of the land”, that is, sin.  We must declare war upon the sin that is so prevalent in our lives.

Fear?  As in afraid to take on iron chariots?  No excuse!  Someone has said that 80 times in the Bible it says, “Fear not” or some variation thereof.  I’ve not counted them, but it certainly is in there many, many times.  Do we believe God will go before us to clear the way or not?

At the words of the Angel, Israel wept (v4).  They sacrificed to God (v5).  Did they really repent?  It appears that perhaps they did not.

We must not be like that in our own battles.

Go on to study of Judges, Chapter 2.

2 thoughts on “The Book of Judges, Chapter 1”