Skip to content
Home » Blog » Attitude » Are You Proud to Be an American?

Should a Christian be patriotic? 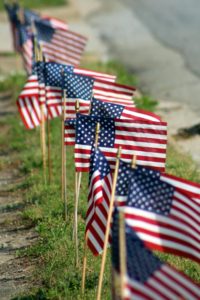 Jeremiah was a true patriot. He wrote an entire book called Lamentations, based upon his sorrow following the fall of Judah to the Babylonians. So, it should be evident that it is not in and of itself wrong to love your country, to express love of country or feel loyalty to your country. In fact, it can be argued that disloyalty to one’s country is a sin!

Loyalty is a godly trait. We are expected to express that loyalty in many ways, but few are more important than loyalty to country, spouse, church, employer and, naturally, God.

Many were disloyal to God, but sprinkled here and there were loyal subjects to God such as Noah, King David, Abraham, Noah, Jesus and the Apostles.

There were those who were loyal to another human being as well. Jonathan was loyal to David. Sarah was loyal to Abraham. Abraham was loyal to Lot. Apparently, Luke and John Mark were in the end loyal to Paul (2Ti 4:11) in spite of Paul feeling rather abandoned at the time, and in spite of Mark’s having disappointed Paul in the past (Ac 15:36-38).

God Himself expresses His loyalty through a series of covenants. A covenant is a divine contract, which means that God will be loyal to His word. He reaches out to a sinful human race because He is loyal. Jesus Christ expressed loyalty by dying for our sins.

Some small-minded people point to fireworks as the problem. They compare firecrackers to pagan bonfires and Pharisaically pat themselves on the back, feeling they are more righteous than the great unwashed masses going to see fireworks. It takes a real idiot to not know the difference between a firecracker and a bonfire. Just as Jesus compared the Pharisees to whitewashed tombs, these people focus on the outer appearance and ignore the more important things.

No, the problem with patriotism and so many other things in this life is one of priority. Who or what we put first in our lives is what our god is. When the real God does not sit in that seat, everything else is in vain.

The world treats patriotism, sports and politics with a party spirit. “He’s our man!” “She’s our woman!” “We are number 1!” No matter what, we remain “true” and loyal to this or that thing or person, unless it is so egregious that we feel we must drop support and move on.

Oddly enough, some will cling to that object even then. I am reminded of the Cleveland mother on TV crying, “But he couldn’t have done it because I love him!” as though a mother’s love made it an impossibility and all other criminals that came before did not have a mother’s love.

People clung to Michael Jackson even after it became obvious that something inappropriate was going in on. People supported Anthony Weiner in the belief he was sorry, even though discerning people knew he was only sorry for getting caught. People like Whoopi Goldberg support Rachel Dolezal in all of her mental delusions.

People go to sporting events and “just believe”, as though that is all that’s needed for a winning team. When confronted with the reality that their team really is fallible, they get angry and riot in the streets.

This is not godly! If we are truly loyal to God, we will stop and reflect upon what pleases Him rather than letting our emotions run out of control.

Jeremiah was a patriot. He was loyal to Judah, but what God wanted came first. In fact, things were so bad in Judah that God instructed Jeremiah to do something that seems odd to tell a patriot.

14 Therefore pray not thou for this people, neither lift up a cry or prayer for them: for I will not hear them in the time that they cry unto me for their trouble.

Judah no longer put God first, even if they ever had under the righteous kings that came into the scene from time to time. They were still “patriotic” in the world’s way of being patriotic. Jeremiah was warning them and telling them the truth, as painful as it was, but they conspired to shut him up rather than listen!

We have passed a major milestone in this country’s moral slide, and we probably passed the point of no return long ago. Undoubtedly, our message will become more and more unpopular, even among the so-called religious in this country. Perhaps their “patriotism” will kick in and turn violent, as it did towards Jeremiah, Lot and so many others.

Will our own patriotism waver, or will it be as Jeremiah’s, who prayed for his people up until he was commanded not to? Will we continue to pray for our leaders as commanded (1Ti 2:1-2)?

What should we pray for? Wisdom for our leaders and heart-felt repentance! What else does God desire from anyone who does not know Him but this starting point?

We also have a responsibility to put God first. We can easily fool ourselves into believing we do when we really do not. No human being, not even our spouse or church organization, comes before God.

People show themselves to not truly be following God in various subtle ways until something occurs to make their motives clearer.

It goes back to a “shocking” statement I once made that I am not a follower of Herbert W Armstrong, nor do I believe everything he taught. He was a man. He was not God, and he made mistakes. I am a Christian, which means I follow Christ! You cannot follow HWA and Christ both (cf Mt 6:24)! Christ will not sure the limelight with any mortal (cf Isa 42:8; 1Co 1:29)! It is OK to respect HWA, to be thankful that God sent a messenger to a spiritually confused world, but to follow him is to take it too far.

To do otherwise is idolatry!

Are we loyal to God and a patriot of the Kingdom, or have we put some other person or group in their place?