Skip to content
Home » Bible Studies » The Book of Judges, Book of Ruth and Life of Samuel 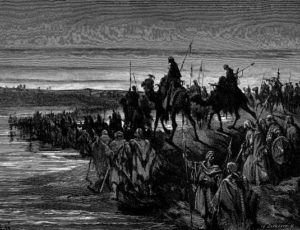 The Book of Judges is an interesting period in Israel’s history, to say the least.  The phrase “every man did that which was right in his own eyes” is pretty much an executive summary of the book.  However, it really is much, much more, as it is the story of human beings since Adam and Eve took it upon themselves the prerogative to determine good and evil for themselves.

The period of the judges came right after Israel crossed the Jordan into the Promised Land. In reality, Joshua would have been Israel’s first judge, unless of course you count Moses who did not enter the land of Canaan. It ended with the reign of Saul, albeit Samuel, Israel’s last judge, did not die until David was anointed king.

The story of Ruth took place in the last portion of the time of the judges, as Ruth and Boaz were David’s great-grandson.  The book used to be on the same scroll as Judges.  I will be adding it to this study in the near future.

The period of the judges ended with Samuel, the last judge, when the people demand a king “like all the nations”.  This points to the utter failure of the period, and this one is particularly important, IMO, as it points to the failure of the arm of the church at that time, and therefore, I will include a final study on the story of Samuel to complete this study.  Could there be a message for the Church today?

Studies on Judges, Ruth and Samuel

Bible Study on the Book of Judges

Bible Study on the Book of Ruth

Bible Study on the life of Samuel