It’s been an amazing election season for many (of the wrong) reasons, and Trump’s win definitely runs counter to everything we knew before, so here’s bit of a lighter look at things post-election, and in particular some of the reactions.

It’s been a long and mostly puzzling haul, but the election’s over. Much of it was nasty, filled with anger and scandalous. We can either laugh or we can cry, so I choose the former.

Before delving into the fun, of course, what was truly amazing was that the media even after kept getting it wrong. In fact, they were downright insulting that Trump supporters were uneducated (i.e., stupid), angry (and Bernie supporters weren’t?), white (Trump could not have won without some Latino supporters), and so forth. Many Trump supporters actually were angry, and they had good reason to be. They worked hard, lost it all in a crash, not allowed to dig back out because the economy had an abysmal recovery and now were threatened with healthcare skyrocketing costs after begin promised “affordable” healthcare. People basically wanted someone very different and non-establishment, but Trump’s win still confounds many liberals.

Even that is an over-generalization:

The pundits and the popular media all say similar things about Donald Trump voters. It’s mostly disparaging and mostly wrong.

A recent Denver Post column by Dottie Lamm said Trump voters are angry, “resent undocumented workers,” fear terrorism and losing their jobs, and feel like they don’t have any say.

I’m none of these things, but I’m voting for Trump.

Actually, I’m not voting for Trump, but against Hillary Clinton, who wants to solve every problem with other people’s money and bigger and often suffocating government, with a corresponding loss of individual freedom, economic liberty, and job creation. 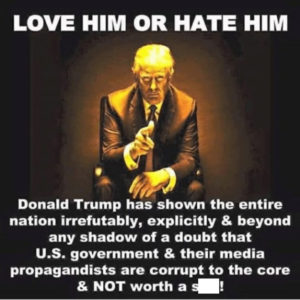 I actually read part of an article (I just could not finish it) that was trying to argue that this election is not the choice between the lesser of two evils. It then went on to tear down the other candidate all the while ignoring the glaring defects of their own candidate. Isn’t that what politics really is? We promote deficient and flawed people to be our leaders and hypocritically proclaim their virtues while ignoring the defects of “our” candidate (speaking from a worldly point of view, of course, since the Church tries to not take sides in these evil days).

What made me shudder, though, is the thought that certain actions by their candidate would not be seen as “evil”, when in actuality their deeds can be found in any list of biblical sins. We honestly live in a world where good is called evil and evil is called good.

In all seriousness, when so-called Republicans are vacating their party to vote for the supposed polar opposite, it really points out that the two parties are not as far apart as the hype suggests. It means that hypocrisy has ruled in the Republican party a long time, and it really is true that it matters little which party you vote for.

Of course, when anyone points out those character flaws in another, it is very important to insult the other person’s point of view. They must be ignorant, racist, … whatever label you can use at the moment. You can have any opinion you want, as long as it is the politically correct one.

Watching the election results come in was pretty intense for many. Reality set in that we were either going to crown either the King Buffoon or Queen Criminal.

The outcome of the election was a surprise to many. I knew it would be close, but I never figured it would be that close. It was strange to watch, particularly when the liberal propagandists started realizing that Trump won.

Still, what I really find funny and ironic is the aftermath. Lots of people wondered whether or not Trump and his supporters would support the election results, but who is out there protesting?

I mean, these are the rules of your country. I guess rules and rationality don’t mix well with liberalism.

Oh, and what of all that “hate speech”? Someone interviewed a protester about why she was protesting. She stammered a bit and then blurted out, “He’s an idiot!” Whether or not he is, he is our President, and as such his office deserves a modicum of respect.

Seriously, one reason Glenn Beck lost a lot of respect in my eyes was because one of them (on the radio, it is hard to know which one is speaking when they are joking and talking over each other) called President Obama a “moron”. Perhaps he did not mean it that way, as joking can get out of hand, but there is no other way to interpret it. Likewise, Donald Trump is our President, like it or not, and we should be praying for his (and subsequently the nation’s) success.

Does protesting and rioting the results of the rule of law really work? Of course not!

If nothing else, Trump has already created jobs! I mean, you have to give credit where credit is due. Comedians have lots of material to work with for at least four years now!

It was rumored beforehand that after Trump’s win that some celebrities would leave the country. Unfortunately, it looks like George Stephanopoulos is going to stay in spite of rumors. How many more jobs would open up if they all left?

So, for now, it looks like Donald J Trump is our president elect, and the White House will be his new home in January.

We should have a congratulatory attitude of Trump’s win. He will be in charge of the defense of the nation. He will need all the help he can get at that job.

Most of all, we should be thankful, especially this time of year, that we live in a nation with a history of peaceful transfers of power. Let’s not ruin that one yet, OK?

Hopefully, we aren’t a nation of turkeys. Even they can find something to be thankful for!

One thought on “The Lighter Side of Trump’s Win”