Skip to content
Home » Blog » Ancient Israel » Then, the Wilderness

The Exodus was not the ending but the beginning, and it started in the #BiblicalWilderness. 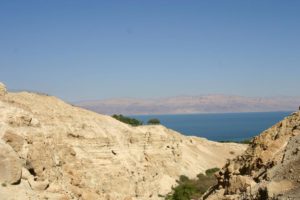 View of the Dead Sea from the wilderness

The wilderness appears in many stories and prophecies in the Bible. Some scholars claim that the wilderness is a place of testing, and they cite the temptations of Jesus in the wilderness for 40 days and 40 nights. IMO, however, it means much, much more than just that.

In its simplest form, the “wilderness” simply means a wild place.  It is mostly uninhabited, not built up and not farmed.  It can be a dangerous place of cliffs and no water.  Consider that later in Israel’s history, they not only took the Azazel goat out to the wilderness but threw it off of a cliff in order to ensure it did not return.  Hagar and later Samson cried out for water in the wilderness.  It was not a safe place.

It wasn’t safe from other human beings, either.  The Good Samaritan story took place in the mountains, in the wilderness, where robbers and raiders were known to steal and even kill.

Certainly, Israel went out and experienced thirst and at various times hunger as well.  They were bitten by serpents, raided by the Amalekites and experienced fearful trials.  It makes sense to equate the wilderness with testing.

However, is that really all?

Moses was driven out to the wilderness — not once, but twice.  He fled Egypt after killing an Egyptian, and that was likely a time of testing.  Even the fact that it lasted 40 years — 40 being the number of trials — reinforces this.  Israel and Moses both wandered after the Exodus as well — also for 40 years.

Did Moses really need an additional 40 years of testing, though?  Why did he once again find himself out in the wilderness?

Consider Elijah, who voluntarily at times lived in the wilderness in order to escape persecution.  Were these times of testing for him?  Do we volunteer for testing, or is there something else going on?

Many believe in a Place of Safety for the Church during the Great Tribulation.  Is it?  It is in the wilderness, after all.  Does the Church gather together for a time of trial and testing?

In one sense, yes she does!

Consider why people came out into the wilderness to see John and Jesus alike.  Therein lies a key.  People had to overcome difficulties, and in particular if they or someone with them had an infirmity that needed healing, but the hardship is not exactly the point.  They came out to be healed and/or to learn.  The test was just how willing they were to be taught.

Ancient Israel was willing to leave Egypt, but they were not willing to learn, were they?  Yet, again and again, God taught them patiently until they rebelled at the very door of the Promised Land.  After they left Egypt, they headed to Mt Sinai, where they were given the Ten Commandments and other instructions.  They built the Tabernacle, and then they headed out to the Promised Land.

The woman of Revelation 12 heads out to the wilderness for 3-1/2 years.  Does she sit there twiddling her thumbs the entire time?  No, she is in the wilderness, so she has something yet to learn!

The Days of Unleavened Bread are seven in number.  Seven is a complete cycle of something.  It can be a complete week, a complete hatred (as in hating six things, but finding seven abominable), or a complete lifetime.  Our entrance into The Promised Land, at least for most of us, is only after our lives have finished its complete cycle.

God works in parallel, upon multiple planes.  The Feast of Tabernacles is also seven in number.  God is working with all of humanity on different levels, physical and spiritual, to prepare mankind for the final harvest.

What is interesting is that ancient Israel looked back upon a time between their Exodus and their entrance into the physical Promised Land, a time when they wandered in tents in the wilderness.  However, for those God is calling now, we are abundantly spiritually blessed, which is pictured in the prophecies about the Millennium.  We straddle two existences: the physical and the spiritual.

Ancient Israel could not see the other plane, though.  They focused upon the here and now — and they complained … and they murmured … and they rebelled.

Which plane do we focus upon?  If we are in the wilderness, and spiritually this world is nothing less than a wild place without sane rules, then what are we learning?

Hopefully, we are learning to deal with and avoid sin.