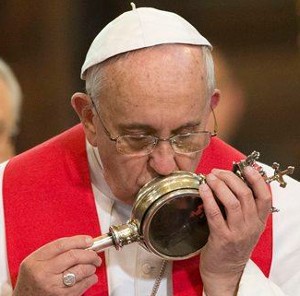 Pope Francis kisses ampoule of blood that half liquefies

Today, as Newser puts it, “Pope Hailed for Blood ‘Half-Miracle’“.  Kissing a relic with the blood of St Gennaro, it began to liquefy, but not entirely, thus only being a “half-miracle”.

So, is God behind “half-miracles”?  Is that the business God is in?

I recently wrote in “Faith or Make Believe?” how some approach Christianity with the same expectations that pagan rituals bring about in that the participants are looking for something magical rather than life changing.  There will come a time when a false prophet will perform lying wonders that will deceive the entire world.  It would appear that there is already a built-in audience for such deceptions.